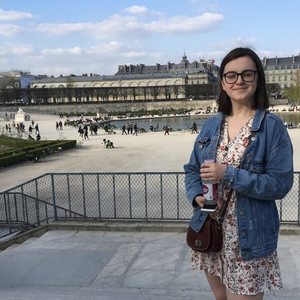 I have been a French speaker since the age of four, having attended a French primary school and spent many summers there. Because of this, I have a high level of familiar, native-like French as well as the formality and correctness of taught French. I sat the Leaving Cert in 2018 and received a H1, with particularly high marks in my oral and listening exams.
I'm now in my final year of Linguistics at the University of Amsterdam, which has only increased my passion for language. I've spent some time as an English tutor to a Dutch family, which has given me great insight into teaching second languages. Even though the languages themselves are different, the skills and methods are totally transferable.

All languages in which the lesson is available :

Having studied Second Language Acquisition, I understand the importance of immersion in language learning. That's why I based my teaching on interaction, conversation, and absorbing as much of the language as possible. Learning lists of grammar and vocabulary by heart can only get you so far!
I provide a good foundation in 'the basics' (spelling, grammar, vocabulary, etc) but my main emphasis is on providing an environment where students feel comfortable trying and making mistakes. After all, that's the best way to learn.

The free first lesson allows you to get to know your tutor and to decide whether they meet your needs.

There is no difference in my rates based on your level, as I will put equal effort into all of my students.
If a lesson is cancelled less than 24hrs before the scheduled time, a 50% refund will be issued. This is to ensure the preparation I put in has not gone to waste.

All languages in which the lesson is available

All of our reviews are collected by us and are 100% reliable. They correspond to a real experience had by the students of Cathy.

The free first lesson allows you to get to know your tutor and to decide whether they meet your needs.

Describe the problem encountered on this ad